The Fall 2022 Annual Service Plan proposes service changes for Fall 2022 as the system continues to rebound from the COVID-19 pandemic. As of February 2022, ridership has recovered to about 59 percent of its pre-pandemic levels, and is expected to continue rebounding throughout 2022 and 2023 as pandemic-related restrictions are lifted and more residents return to in-person work.

MDOT MTA is proposing the adjustments to core bus routes summarized below to continue improving access and equity, reducing crowding, shifting excess capacity to other service periods or routes, and improving reliability and travel time. MDOT MTA will continue to monitor service, traffic congestion, ridership, capacity, and resource availability, and will make minor adjustments seasonally in 2023 as the region continues to emerge from the pandemic and ridership continues to grow.

A new type of QuickLink service is proposed to offer faster, limited-stop service along busy CityLink corridors. As shown in the comparative diagram below, in order to be able to provide faster service, QuickLink service would stop less often than the typical CityLink route, but more often than the typical Express BusLink route. These limited stops would focus on serving major transfer points and activity centers without serving the minor stops in between, which would continue to be served by other routes

As shown below, the pilot route for the new limited-stop service, QuickLink 40, is initially proposed to offer weekday service every 20 to 30 minutes. This initial service level would be monitored carefully through 2023 to determine how well it is meeting ridership demand. Service levels may be adjusted in February, June, and/or August as needed.

QuickLink 40 is proposed to offer faster east-west travel between North Bend Road in Westgate and the Essex Park & Ride. The route would operate on Edmondson Avenue, Franklin and Mulberry Streets, US-40, Fayette and Baltimore Streets, East Lombard Street, and Eastern Avenue.

CityLinks Blue and Orange would continue operating alongside QuickLink 40 in order to continue providing local service to stops that wouldn't be served by QuickLink 40. Given the overlapping service and anticipated ridership distribution among all three routes, MDOT MTA is proposing a slight reduction in service on CityLink Blue to efficiently balance resources:

The bus stops in the table below will be served by QuickLink 40.

LocalLink 32 is proposed to operate daily from 6:00 A.M. to midnight, and the route's proposed service level is shown below. Exact stop locations on Lansdowne Road have not yet been determined. 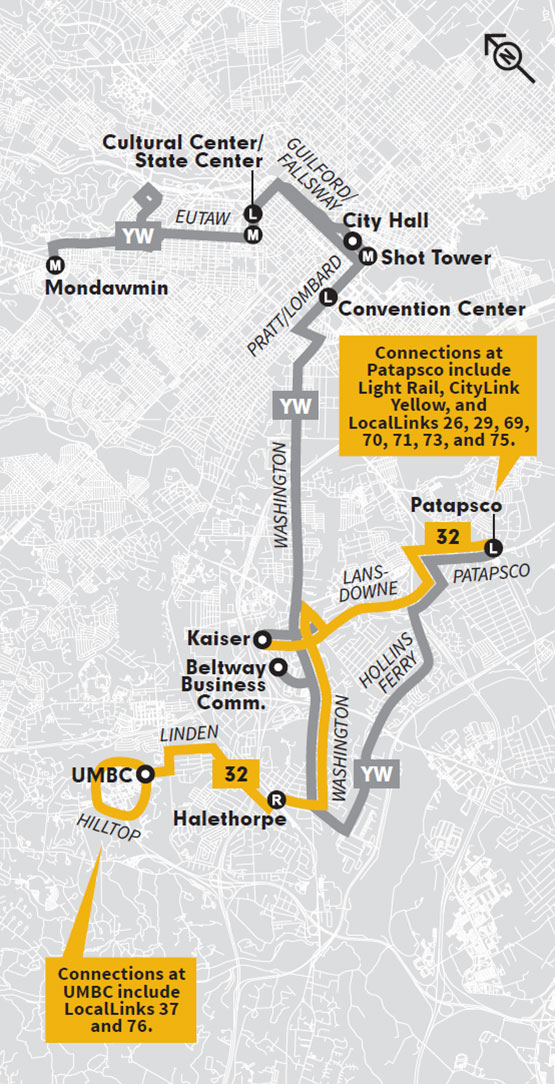 LocalLink 26's current southern endpoint at the South Baltimore (aka Brooklyn) Park & Ride is proposed to be extended to Patapsco Light Rail Station via Patapsco Avenue.

Additionally, extending LocalLink 26 to the Patapsco Light Rail Station would improve transfer opportunities, since numerous bus and Light Rail connections are available at the station.

No change is proposed to either weekday or weekend service frequencies on LocalLink 26, and its operating hours would also remain unchanged. 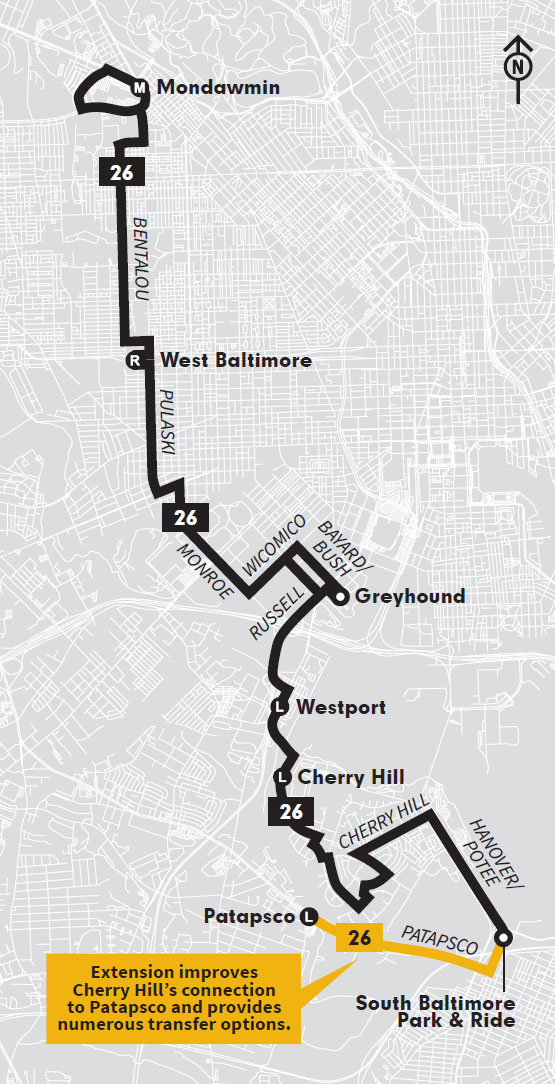 To improve late-night connectivity for riders traveling along 33rd Street and lower Loch Raven Boulevard, all weekday and weekend late-night trips on CityLink Silver are proposed to be extended from Johns Hopkins University to Morgan State University.

Apart from these extended trips, no changes are proposed to the route's street routing, service frequency, or operating hours. 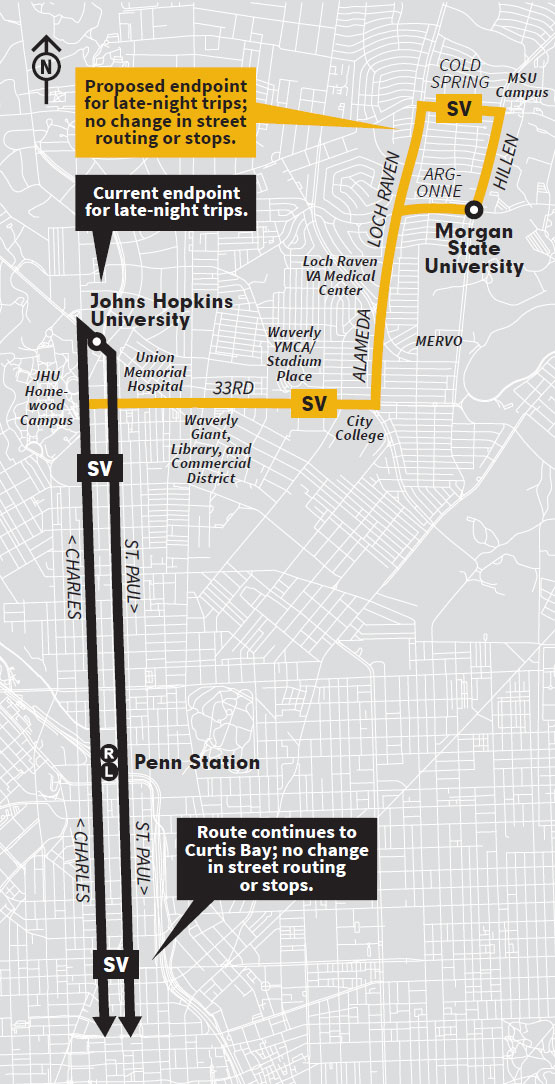 To improve the reliability of CityLink Yellow, the route's UMBC branch is proposed to be discontinued; service would operate to the Beltway Business Community on Commerce Drive instead. The route's other branch to the Patapsco Light Rail Station would remain unchanged.

As shown in the maps, to maintain a connection between UMBC and various points of interest along Washington Boulevard, a new LocalLink 32 is proposed to pick up CityLink Yellow's former UMBC branch and operate from UMBC to the Patapsco Light Rail Station.

No change is proposed to either weekday or weekend service frequencies on CityLink Yellow, and its operating hours would also remain unchanged.

A direct connection between UMBC and Downtown Baltimore would still be provided by LocalLink 76. 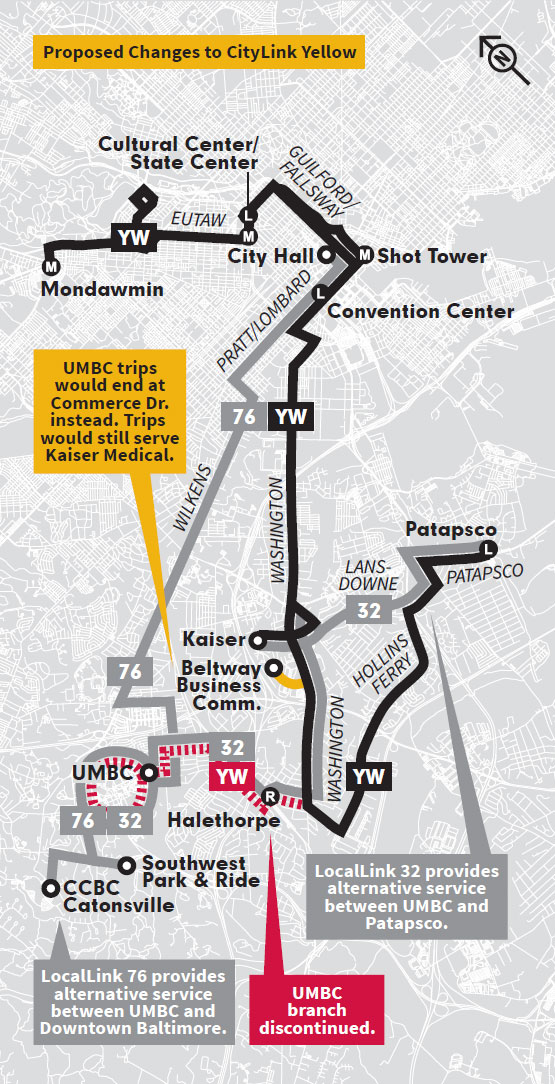 CityLink Purple duplicates other service between City Hall and Johns Hopkins Hospital. It is therefore proposed to be shortened at City Hall. The shortened route would operate between Catonsville or Paradise and City Hall.

The shortened route would also be more reliable since the current segment between City Hall and Johns Hopkins Hospital is frequently impacted by traffic congestion, hampering the reliability of the rest of the route.

Not only would CityLinks Orange and Blue (and the proposed QuickLink 40) continue to provide frequent service on Fayette Street west of Downtown Baltimore, but a direct connection between Johns Hopkins Hospital and Downtown Baltimore would still be provided by the Metro Subway, CityLink Brown, and LocalLink 56.

No change is proposed to either weekday or weekend service frequencies on CityLink Purple, and its operating hours would also remain unchanged. 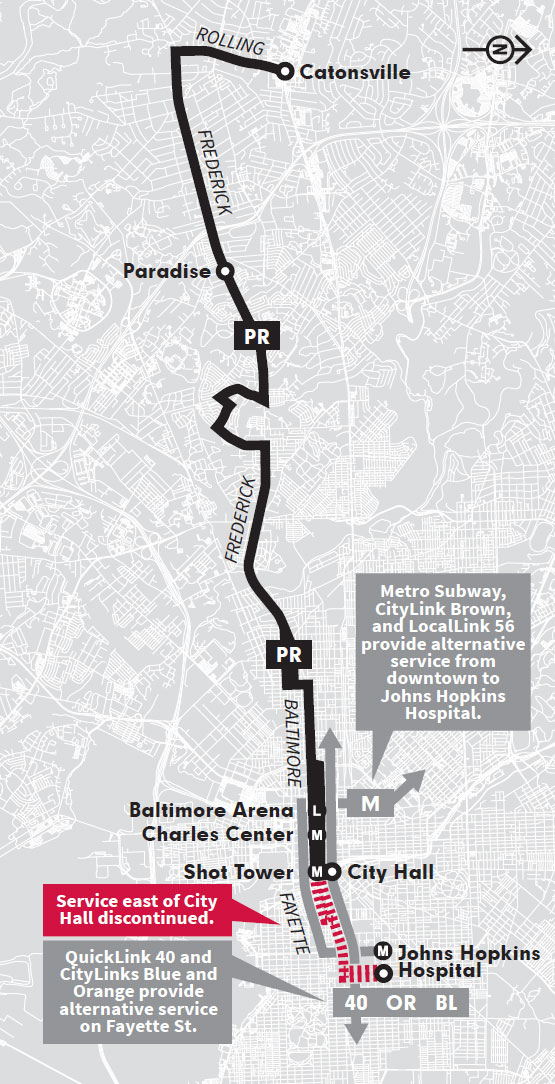 Approximately nine bus stops along Park Circle Drive and Standard Drive in the Parkway Center Industrial Park would be discontinued with no alternative service available.

No change is proposed to either weekday or weekend service frequencies on LocalLink 75, and its operating hours would also remain unchanged. Overnight service to Downtown Baltimore would remain unchanged as well. 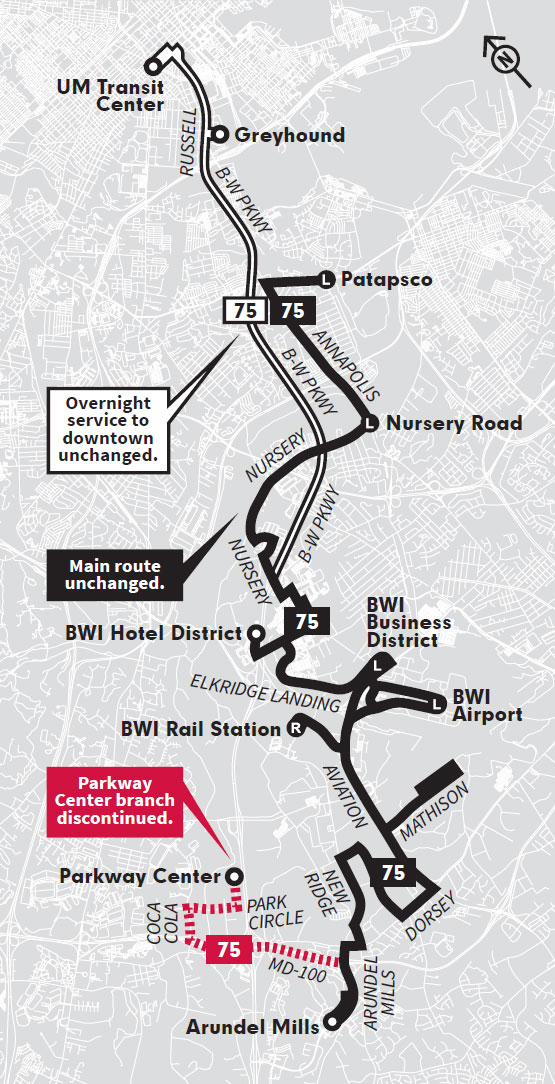 Due to low ridership, Express BusLink 103's reverse-commuting branch to Midway (Kirk Avenue and Curtain Avenue) is proposed to be discontinued.

Additionally, since traditional 9-to-5 commuting has not yet recovered to pre-pandemic levels, the main route's service is proposed to be reduced to four southbound trips to Downtown Baltimore in the morning, and four northbound trips to Cromwell Bridge Park & Ride in the afternoon.

Other than the proposed discontinuation of the route's Midway branch, the rest of Express BusLink 103's street routing and limited stops would remain unchanged. 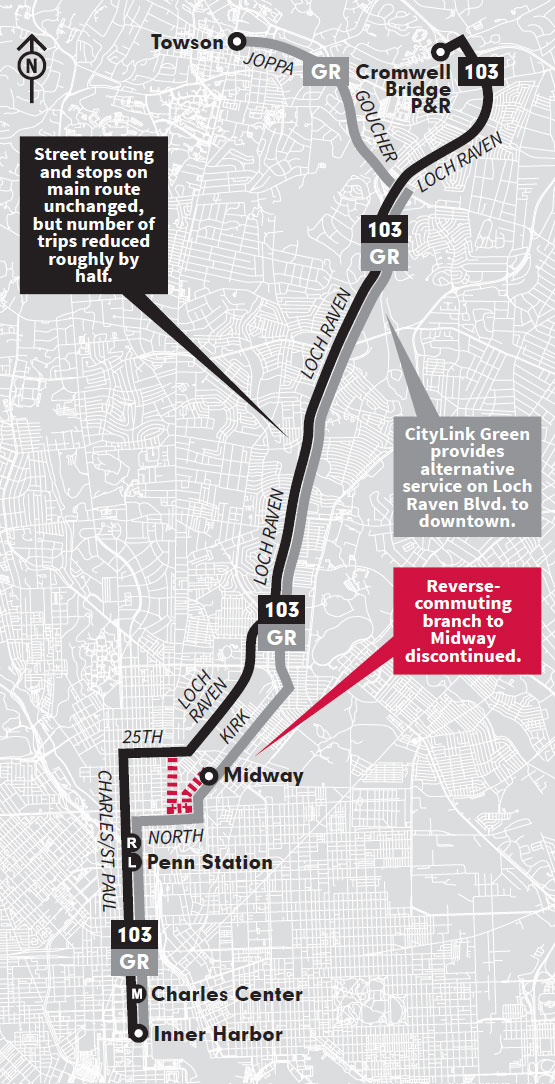 Express BusLink 104 is proposed to be discontinued due to low pre- and post-pandemic ridership. The route currently offers one southbound trip to Harbor East in the morning and one northbound trip to Cromwell Bridge Park & Ride in the afternoon.

Alternatively, riders would also be able to take CityLink Green, LocalLink 53, or Express BusLink 103 to North Avenue and transfer to the CityLink Gold's Canton Crossing branch to continue to Johns Hopkins Hospital and Fells Point.

Riders who need to travel from points along Loch Raven Boulevard to Harbor East would be able to take CityLink Green or Express BusLink 103 to Downtown Baltimore, then transfer to CityLink Navy to continue to Harbor East. 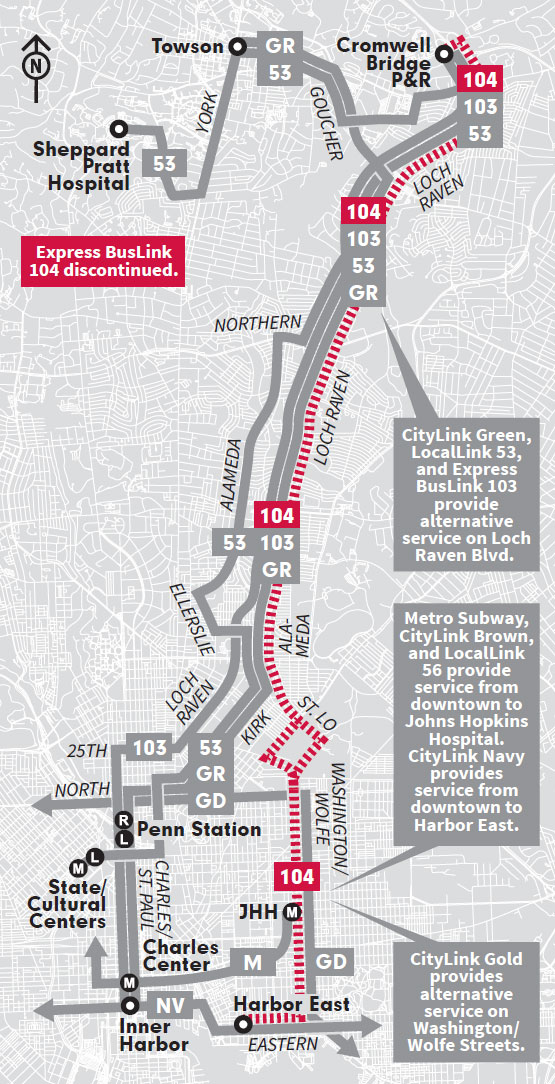 Public hearings and the public comment period have concluded. Thank you to everyone who submitted comments.

Using the translate feature with screen reading software requires having the synthesizer for the foreign language you request already installed on your screen reader. NVDA users should use the e-Speak NG synthesizer. JAWS users should download and install Vocalizer Expressive voices. VoiceOver and Narrator users should download the appropriate voices directly from Apple and Microsoft. To view the disclaimer, press down arrow until you hear the words “view disclaimer” and press enter.